During the General Assembly on Sunday March 28, the Parents Association of Shanghai French School has elected 4 members to the Board of Directors, which now has 8 elected parents serving the school. Discover in pictures the role and functioning of the Board as well as its members.

Our school was founded 25 years ago next year, by a small group of parents who were keen to provide a French education to their children, based on the idea of equality and mutualization of interests. Still today these values remain at the core of the Lycée Français de Shanghai and its governance.

Their candidacy and commitment are a contribution to the democratic life which is at the core of the functioning of Shanghai French School.

SPECIALIZED COMMISSIONS OF THE BOARD

Introduction of the members of the Board

Philippe Snel is of Belgian nationality and has been in Shanghai for more than 15 years. He is the father of three boys, all of whom are graduates of Shanghai French School, as well as a daughter currently in Grade 4 in Qingpu. Lawyer and Managing Director of Da Wo Law Firm, he has been President of the Board for 5 years and member of the Euroboard. Philippe wishes to continue to support the school in its development dynamic, while providing the stability and continuity necessary for the good management of the school. He also intends to share his experience as President of the Board to ensure a smooth transition to a new generation of school administrators.

In China for over 15 years and father of two daughters at LFS, in CE1 (Grade 2) and 4ème (Grade 8) in Qingpu, Julien Barès is VP of Tencent Games. Consular Advisor for the Shanghai area since June 2019, he wishes to put his commitment at the service of the LFS community, but also to invest in the digital field to support the digitalization of Shanghai French School (e-learning, digital resources, tools online) and meet the challenges of the school of tomorrow.

Settled in China since 2005, and mother of 2 children attending our school on the Yangpu campus, in CM2 (Grade 5) and 6ème (Grade 6), Amélie Fauché is the Financial Director for the Asia region of AGFA, a company in the medical field. Amelie wishes to get involved in the governance of the school, by providing the Board with her financial skills and helping to ensure the stability of the finances and the sustainability of the LFS, in order to allow our children to flourish and succeed on the long term. She is also a member of the Euroboard.

Mother of 3 children in CM2 (Grade 5), Seconde (Grade 10) and 4ème (Grade 8) in Qingpu, Marie De Boni taught Mathematics, Physical Sciences and SVT in French schools in India, Japan and Shanghai. She now teaches French at Guangming High School, a Chinese public school in Shanghai. Marie De Boni wishes to bring her passion and experience of teaching to the development and success of our students, but also to promote our school to the various communities in Shanghai.

Based in Shanghai since 2017 and mother of a 20 years old daughter, who is continuing her studies in France, and a daughter in Terminale in Qingpu, Isabelle Ducrocq is Research and Innovation Manager for an automotive supplier. She wishes to put her commitment at the service of the LFS community in order to develop the school, while adapting to new challenges.

Francis Lim, French national of Cambodian Chinese origin, living in China for 15 years, is the father of 2 children, including one in CE1 (Grade 2) in Yangpu. Entrepreneur, he has set up a E-commerce and Import / Export company in Shanghai. As a co-opted member of the LFS Board since September 2019, he wishes to represent a growing bicultural community within the LFS, contribute to the growth of the Yangpu campus, the district where he resides, and to commit to an ambitious LFS communication.

In Shanghai since 2004 and father of a boy in 4ème (Grade 8) in Qingpu, Philippe Barthelet is in charge of the management and processing of technical, commercial and accounting data for an Italian automotive supplier. He wishes to support greater involvement of parents in the strategic decisions of Shanghai French School and to use its multidisciplinary skills to support communication, quality of service, simulation of short and long term plans, construction and maintenance.

Livia Rafidison arrived in Shanghai in September 2020. Mother of two children at Shanghai French School, Yangpu, in K3 and CE2 (Grade 3), she involved herself, since her arrival, in the School Council and the canteen. An engineer by training, with more than 15 years of experience in the energy sector including 13 years at Engie, she wishes to contribute with enthusiasm and benevolence to the development of the school and in particular of the new Yangpu campus, by bringing her fresh outlook and her transversal vision to the challenges of the school. 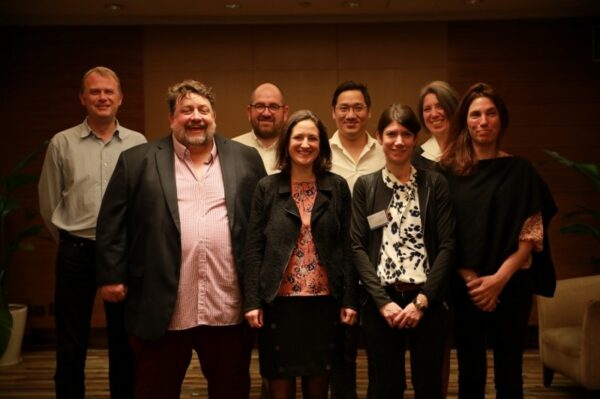